Ah, okay. MY finals FINALLY finished! 😀 So time for some blogging!

I have so many adventures to tell you guys about, so let’s start with the recent one 🙂 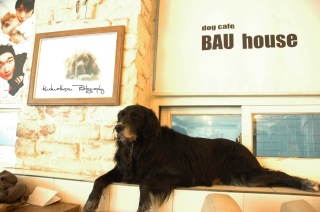 First of all the name of the cafe is Bau Haus and it’s in Hongdae, just a station away from Sinchon, so it’s awesome. Basically you can feel like owning a dog, without the fuss of feeding and cleaning up after them. 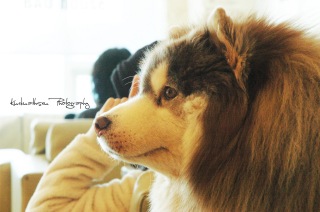 I must say the idea intrigued me, and I wondered the insurance that needs to come with it ie. dog bites person or person bites dog etc. BUT nevertheless, it was a smart idea, I think.

They only offer Cold drinks for around 5000 KRW (AUD$5) upwards, so it is pretty decent since you can play with the dogs and stay for as long as you want. You can also buy them treats to win their puppy love. Oh yes, they love you more if you have treats of course. Little like bribing, so they have been taught well. 😀

The dogs are hug-able, pet-able, but not ride-able nor are they edible. 😛

Although in my mind I did.

Ride them, that is.

They are amazingly huge and furry and would give you love under one condition: Scooby Snacks. So you can judge their popularity by how FAT they are.

하키 is quite possibly the most popular of them all. His fur is like Chocolate (good enough to eat? Haha. Jokes. That’s for another blog entry :P) and he modestly begs for treats just by sitting next to you with his tongue out. I gave him like 5 by the end of the day 😀

I also love this guy.

The shopkeepers must have drawn eyebrows on his, which I found hilarious.

A few caution. Your coats are probably gonna be covered in doggie fur if you are petting them and such. Although they were smart enough to not put hot drinks on the menu, spillage do happen, dogs will be jumpin’ on tables and your lap sometimes (the small ones quite possibly), but they are all well-behaved.

Also I know what you’re thinking, they must stink right?

Surprisingly not at all really.

The room is well air-conditioned with a lot of sprays and odour-killing technology.

If you are allergic to dogs…… I don’t know why you would want to come here.

Well. Maybe. Except. To die. A furry death.

I have hundreds of pictures, it’s a shame I can’t put them all here.

Each of them have different personalities and so yeah! pick out your favorite! 😀

A reason why WAR is unlikely ~

I know this is a bit late, but I just finished my Final Exams so excuse me. :p

So, WAR! HEUGH! WHAT IS IT GOOD FOR? ABSOLUTELY NOTHING!

From my first sentence you should be able to deduct a few things about my life in Korea. You don’t have to be Sherlock Holmes to deduce that life is quite likely to be normal and peaceful in Seoul and Sogang University if Ray was just finishing his Finals, and that he is probably going out to kill a few braincells with a few green bottles and magic liquor they call So-ju.

Not entirely correct. I was very stressed during exam times because Koreans are very hard-working and there is a curve for the grades. Of course, I always reminded myself that I was on exchange and the right thing to do would be to go out not to study, but culture is a funny thing, and with culture comes something of conformity pressure. More on that later, but yes, the second part of the paragraph above is true. I need to finish in 5 minutes cause I won’t be able to type tomorrow morning 😀 hahaha.

First, I’d like to say that you shouldn’t take my blog as a research, but as an insight and my opinion.

If I may offend anyone, well I’ll make sure I take this down.

The whole Wiki-leaks thing does make you thing what you can/can’t put on the internet.

So, down to business.

There are a few reasons that I gathered from my Korean friends. I’ve asked them what are the chances of war happening? Why not? Should I get a plane ticket outta here?

Let’s talk about the consequences first.

From what I gathered (don’t quote me or reference me. If you do, I only accept Harvard referencing), if the war happened. A lot of people are going to die. From both sides. Quite possibly…. including yours truly, me. A bomb may or may not be dropped on Seoul first, but the point is both sides will have significant casualties. That’s probably the most likely situation. In my opinion, I think South Korea is going to win nevertheless should the UN back them up.

So fast-forwarding a lot of military operations and James Bond missions, a lot martinis stirred and not shaken, Korea would possibly be reunited. But from what I heard things are like 1984 over there, and centrally planned gov’t is not sufficient enough to keep supplies intact with demand and the economy is suffering, and so do the people living in the country. So there are a lot of people impoverished, starving and homeless. Thus it would set the Korea’s economy back by a few decades to recover and to unify the peninsula.

I agree that this is only one of the possibilities, it could also that they will come to a peaceful agreement. The North will open up under the new leadership, the economy will be freer and it’s a happy ending.

Considering the first gloom possibility is heightened by recent tensions, most, if not all South Korean (from my sample of 10 people. lol.) don’t want a WAR. Some people also said that the ones who would probably benefit from this war are the arms dealers and those who are in the line of fire will pay the cost. So I think we can safely say that there is no interest on why the South would want a war, and could even go far to say, they will do a lot to prevent it.

LIFE as a university is pretty normal, even as we heard it on the first day. Beers were still being drunk, songs were still sung in Karaoke (NoRaeBang) and the thing we stress about most is exams. Although, I’m sure some people have fled the country with parents being all worried and all. I do feel good though that my University cared about me to send an email to see if I was alright, albeit a day late 😛 Should I drop my university’s name here or not? Hmmm…. Haha.

Oh, one thing I have found is that, if you ever found yourself in trouble, committing acts of delinquency, just shout out random university names other than yours. Hahaha. “UNSW IS THE BEST!”, although careful not to do this while wearing your school’s jersey.

So in conclusion, life is normal, yes there are tensions but foreign media hyped it up also, and WAR is quite unlikely in my opinion.

I actually went to the cat one first, before going to the dog one. 😛

Okay, the setting is pretty similar to the dog-cafe except with a lot more scratching posts, kitty litter boxes, yarnball and etc. Oh! fishbone decor as well. IT’s CAT HAVEN.

They are pet-able, although it’s advisable not to pick them up, and I don’t think you can feed them.

This little guy below is the star of this Cafe.

You’ll find that the smaller ones likes to play with you more.

It was playing with my Hoodie’s string. Haha.

Ummm, I must say I like the Dog Cafe better.

Maybe it’s because I’m more of a Dog-person. Haha.

And also because it was probably cat-nap time 😀

Nevertheless, it still has a charm. 🙂

I came down here to spend the National holiday called Korean Thanksgiving (21st Sept-23rd Sept) with a genuine Korean family. My friend has been kind enough to invite him to spend this special time with his family and it was an opportunity that doesn’t come very often.

So I took the road less travelled by, and that made all the difference.

One of the things I found quite interesting is this Parking Spot reserved only for women. 😀
One of my friends said that it was to encourage and promote gender equality on women, since Korea is still a glass-ceiling society I think. Another said that it was courtesy.

What do you guys think? Is it necessary? It’s certainly a quite interesting idea to say the least. 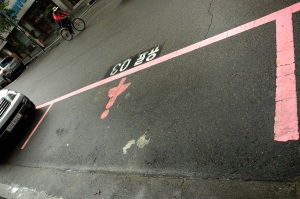