So it’s been just over three weeks but it feels like it so much longer than that, still just kind of getting into the swing of things. Uni is off to an incredibly slow start, but nothing happens quickly/at all in Espana. I’ve been to two information sessions this week for exchange students held entirely in Spanish, so surprisingly, I’m still pretty unsure about everything in general but nothing really new there.

Took to the road on my bike today. No matter how many times you tell yourself to stay on the other side of the road it’s impossible not to panic when someone is coming towards you. Played a bit of the old this path ain’t big enough for the two of us and ended up in a bush for a brief but very embarrassing period on the main street of my university, but then back on the bike as they say. Also might have convinced my new friends that one lane was defiantly just for bikes, actually just for busses. Whoops. Very angry bus driver, four very scared Erasmus students peddling as fast as our little feet could take us out of the way. Let’s just say, I don’t think I’m going to live that one down, and I don’t think they’ll be taking my advice again in the near future…However, I did get us to the beach, which for a city is really quite nice. 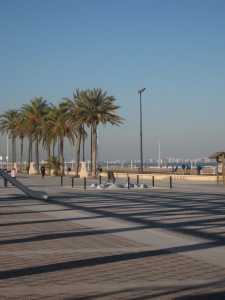 Other than almost getting us killed, I’ve had a fairly good look around the city. It’s pretty incredible. It has a really relaxed vibe, and everything is really well linked by the metro, and by my new friend Valenbisi, which is a system of bikes that you can hire all around the city – practically for free. 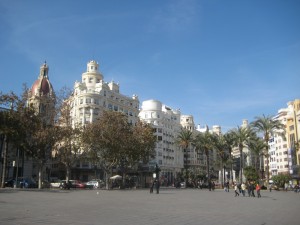 The centre of Valencia

Been out a few times. But over here everything starts so late! People don’t go to the clubs until 3am. I was reading a guide the other day that said, “This club gets going when the others start shutting down at about 6-7am!” So I’m struggling a bit to keep up but hopefully I’ll get there. 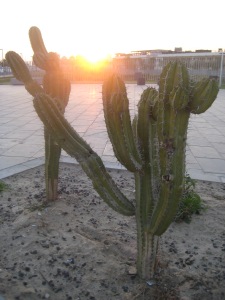 Guess that’s all for now, having a great time and hope everything is going well at home.

So at 6am in the morning when I double checked my departure terminal I noticed something that didn’t seem right. Today was the 24th wasn’t it? So why did my phone say it was the 22nd? Sitting on the edge of the bed, brain still muddled with jetlag it takes me a while, but eventually I begin to realise that yes, I’ve made a pretty large mistake, and yes I am about to get the shuttle bus to Heathrow two days early. Shit.

It’s amazing how far a smile can get you. The nice lady from British Airways and I have a bit of a laugh and what do you know, hello to the 8:15 flight to Madrid. What are the chances? I thought I’d got away with the blunder pretty well until I had to explain to the check in lady and baggage man my embarrassing predicament. Humiliation aside, I was on the way to Spain, with a window seat and whole row to myself.

It wasn’t until I was on the plane that I had any time to wonder how on earth I could have misread the ticket maybe 70 times? To be fair, the 22nd is the date I return home, so it is written just under the 24th – the day I was supposed to get to Spain. But to be honest, I’d been telling everyone that I’d be arriving in Spain on Saturday all along, I’d made an appointment to look at a flat on the Sunday, so really I have no excuse, it just happened to be one of those moments in my impeccably organised life where my brain suffers a small glitch and I make a mistake. Yes, as far as mistakes go, this was a pretty big one. But these things happen to all of us, well, okay maybe just a small minority.

Madrid Airport was an absolute joke! With old Barry Backpack weighing me down I asked about a million different people where to get my bag from – turns out you have to catch a train to the baggage carousels, of course, because that is so logical! Anyway the next hour and a half of my life was one I’d rather forget, but at 2:00pm I found myself on the high speed train to Valencia cruising at a casual 300km/h.

Turns out rocking up in a new city with a new language in the middle of siesta is kind of difficult. But the universe had been on my side all day, although about an hour later somewhere in the cobblestone alleyways of Valencia without a map, or anyone I to ask for directions it left me for dead. I eventually found a taxi and got to the hostel where I got chatting to the girls at reception, one of whom had a room for rent in her flat and just like that the universe was back on my side! Not only that, in my dorm I met a girl from the Czech Republic also about to study in Valencia on exchange. We were later joined by another Swiss girl who is studying in the same faculty as me in at the University of Valencia.

Anyway, there is much more to say, but I think that will do for now, I’ve just moved into my new flat, more on that story later… E x

A shark float in a community parade, Spain

While wandering the streets in a suburb east of Barcelona with Jehangir and Laurie, we happened upon a ‘rehearsal’ for a street parade. About a dozen homemade floats — pedal-powered creatures of the sea, some with pounding dance music and burst of fire extinguisher ‘smoke’ — were being pedaled up the street. The parade rehearsal reminded me of events I had witnessed also in Brazil; neighborhoods put together amazingly clever floats and low tech special effects, costumes and the like, in order to put on their own celebrations.

I admired the DIY aesthetic of the whole thing, the way that people were getting involved, the absolute lack of a boundary between audience and performers; people on the street passed bottles of water to the over-heating drivers of the fish floats as they laboured to propel their colourful floats with muscle power. On the one hand, it was more amateurish that parades I was accustomed to in the US. On the other hand, it was quirky and each neighbourhood had its own opportunity to put on a show. The parade wasn’t just a celebration of fish (or whatever — I still don’t know), it was also a demonstration of local mechanics and organizers. 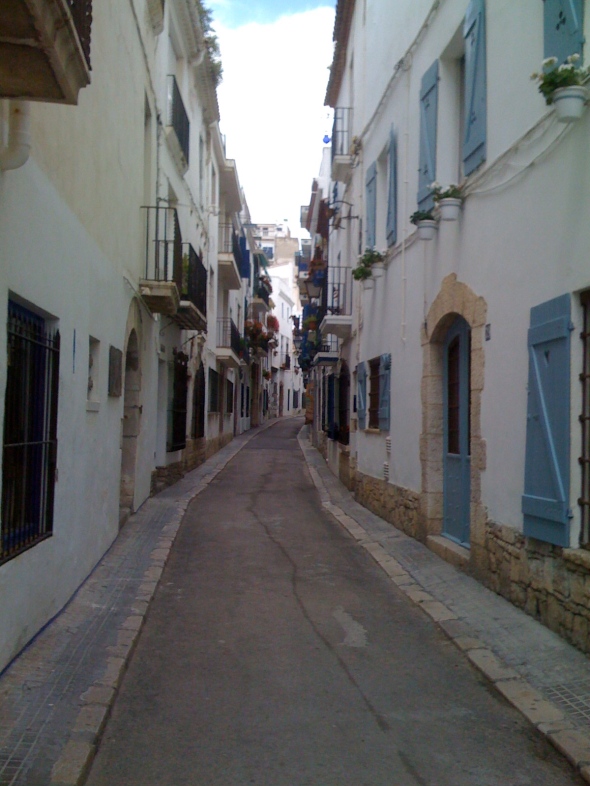 Walking around in the older parts of Sitges, a small town on the Spanish Mediterranean west of Barcelona, I was struck (as I had been before) by how different pre-automobile streets are from the ones I’m more familiar with in Australia and the US. How different to walk around in spaces that were not built to accommodate two lanes of traffic! I’m so used to urban space and even house design dominated by the needs of our machines that the shift in scale, distances between buildings, sharpness of turns, the distance that we can see — everything about the built environment — brings me a kind of odd happiness. The space makes me, as a pedestrian, feel like the centre of attention instead of an after-thought or interloper on what is really ‘car space.’ Even ‘pedestrian malls’ in the US and Australia are more like ‘temporarily taken away from cars’ spaces if they’re outdoors; no community seems convinced enough of the pedestrian nature of space to actually make streets that are physically impassable in vehicles.

I’m not convinced it’s a ‘cultural difference’ between Spain and Australia, but I know that the difference in space gives a very different feel to most activities, including shopping, dining outside, sight-seeing…