It’s the night before I leave Krakow and finish up my exchange experience. Obviously it’s time for a quick reflection.

I didn’t enjoy the university aspect of exchange much, I’ll be honest. I got through two subjects without reading a single academic article or piece of writing – I managed to write entire presentations and exams using Wikipedia and lecture notes alone. And to me, that is a complete joke and should never happen. Other classes I didn’t even bother turning up to because they were boring, because no one did the readings, because no one took attendance and it wasn’t mandatory and I didn’t feel obliged to sit through two hours of an old, fat jolly man enjoying the sound of his own voice while really teaching nothing we couldn’t really in a Norman Davies book.

And because I didn’t get the classes I’d organised to enrol in before I left Australia, my timetable ended up being five days a week, with the one class that attendance was taken for – Polish – being on Mondays and Fridays. No weekends away for me, really, I just skipped a couple of classes here and there but at the end of the day, I had to study and I had to pass. And again, it wasn’t terribly fun and sometimes I feel like I almost wasted my time here because I’ve only been to 6 countries, including Poland.

But 6 countries is still a lot more than a lot of other 20-year-olds I know at home have seen. How many 20-year-old Aussies can say they’ve hiked up Arthur’s Seat in Edinburgh,  have best friends in Hungary and Slovenia, touched the Berlin Wall, seen Manchester United play at Old Trafford, enjoyed the charm of Stockholm’s Gamla Stan or – more to the point – managed to stumble through four months of living in a still somewhat developing post-communist country where they didn’t know anyone, didn’t speak the language and had never been to before?

Not a bad effort, in my books. I wouldn’t come back to Poland to study again, and I don’t know if I’d come here to work in anything other than an EU-sponsored or funded job because organisation and bureaucracy is terrible here. But I hope there’s an infinite amount of visits to this incredible city in my future. 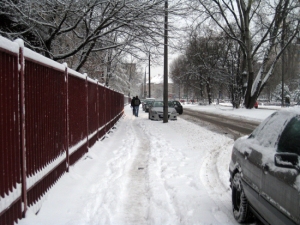 So it’s been snowing for a couple of weeks now. This was a photo I took after the first big snow in Krakow. It was 7:30am (I have an 8am Monday class – it kills me every week) so no one had cleared the paths yet. I never realised it could be difficult to walk in. I didn’t realise that some of the cobblestones in Krakow have a funny kind of glaze or something on them which makes them absolute death traps once a little bit of power’s on them.

I seriously found it that difficult to walk without almost slipping all the time that at first, I had to leave five minutes earlier for class to avoid being late It sounds stupid but it’s true – I have almost fallen over so many times. So I took to walking very deliberately and very slowly. 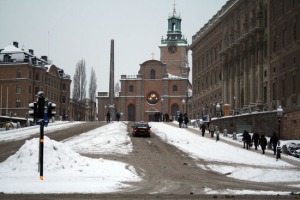 By the time I went on a holiday to Stockholm last week, I thought I had the hang of walking in the snow, but then I was confronted with some we don’t have in Krakow: hills! Or at least very slight inclines – Krakow is pretty much completely flat. I honestly thought I was going to lose my footing and end up sliding down this one.

I feel like a complete idiot because everyone else seems to be able to walk along normally, and this seems like such a simple thing… but snow has given me so much trouble in terms of staying upright, and I completely didn’t realise that would happen!

Santa Claus (and snow) is coming to town! 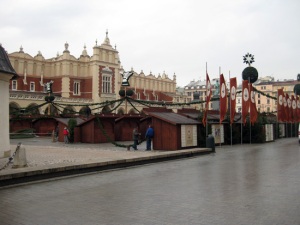 This is a photo I took yesterday of the Rynek Główny, Kraków’s Main Square, yesterday.  At the moment, there are lots of workmen around the Sukienniece, which is the awesome 14th century building you can see at the back of the picture, assembling little wooden carts for the famed Christmas Market and putting up decorations befitting the season.

I really don’t think I have EVER been this excited about Christmas before, even when I was young. My friends here, who are all from Europe and America, don’t quite understand why I’m looking forward to it so much. My idea of Christmas is radically different to theirs – it usually involves sitting in shorts and a t-shirt drinking beer in a relative’s backyard, eating salad because it’s too hot for anything else and repeating this the next day while watching the Boxing Day Test. As much as I love Christmas at home with my family and my friends, it feels like this Christmas season is going to be my first real Christmas, the first Christmas where the ideas and traditions match the reality of the event. The food and drinks, the Christmas carols, the typical images of Christmas we’re bombarded with… this year, I’m actually going to see that unfolding in front of me instead of noting the absurdity of my aunty humming ‘Let it Snow’ when it’s 30+ degrees and humid outside.

And, honestly, I can hardly contain my excitement about the prospect of mulled wine, Christmas markets and making snow angels during the silly season. Does anyone else who is on exchange in Europe feel this way too?