I have been in Japan for about three weeks now. It’s not my first time here (in fact my 5th time), but it is my first time as a student. I’m originally from Finland, so I was already a ‘foreigner’ in Australia, but being a foreigner in Japan is different.

First of all, here I look like a foreigner, a ‘gaijin’. As a European, I fit pretty well in Australia and the locals do not know that I’m from a far away country before I open my mouth. But here they spot me from far, because of the same reasons why I fit in Australia. I’ve heard from my fellow exchange students how the Japanese shop clerks run away to avoid the embarrassment of trying to communicate in English. Furthermore, some hairdressers around the campus refuse to take foreign clients. Paradoxically, there are situations where the locals come and talk to me only because I am, indeed, a gaijin.

I did not really have any kind of ‘culture shock’ when I first came to Australia. It was pretty similar with any Western country I had visited. Of course there are differences, such as the climate, but culturally Australia felt very familiar. It goes without saying that Japan is different. Japan is truly Asia (sorry Malaysia for stealing your slogan) with some Western influence.

Every day activities, such as shopping or asking directions, are so much easier for me in Australia, because I speak the language. However, I have only studied Japanese for less than half a year and most of it by using self-teaching guide books. I have self-studied hiraganas and katakanas, but I can’t read many Chinese characters. I could write a long post about the complexity of Japanese writing system, but I will just state that it is a bit more difficult than the English alphabets, that are pretty much the same as we use in Finland. Thus, buying groceries and ordering in a restaurant becomes a bit of an effort.

Luckily, my host institution Kansai Gaidai has done great work organizing the exchange program. All the teachers and staff speak English, and all classes are concentrated in one building, the Center for International Education. We have Japanese every day, and we can interact with local Japanese students via ‘speaking partner’ program and in normal classes. Therefore, I can recommend this exchange program to everybody, even those without Japanese language skills. However, you can get more out of it if you speak the language. 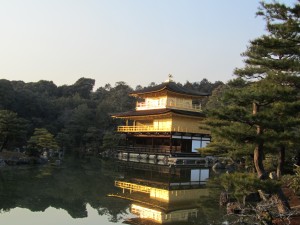 This entry was posted on February 16, 2011 by rikujarvelin. It was filed under Fish out of water, Japan .