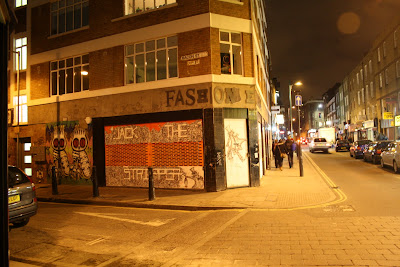 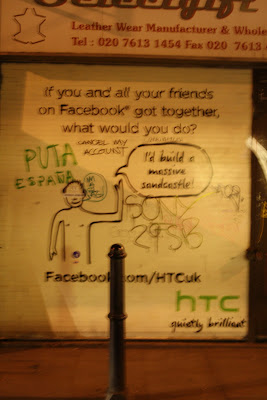 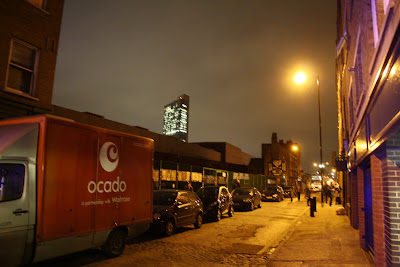 On the way back I came across these kind of art exhibition things and nearly went past, but then I made myself go in and have a look and start a conversation with someone. I did it, but once again I didn’t account for the differeing national character. Where the English politeness had helped me before, I now ran afoul of Londoner standoffishness. Pretty sure if someone who was obviously a backpacker came up and started to have a conversation  with someone in Australia they’d be up for it, but they seemed kind of weird about being approached. Still glad I made myself do it though. 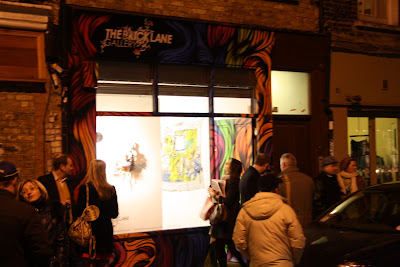 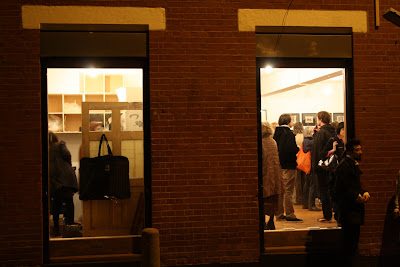 I stayed that night in Stansted because my flight the next morning was really early – like, five or something.  Somehow, because I’d been staying up so late recently, I thought it would be a good idea to stay up all night because it’d be easier than making myself go to sleep early. This was a plan doomed from its outset. I ended up having an hour of sleep and desperately wanting more.
And now, the sad conclusion of my bad luck: I arrived in Cork, met Charlene at the airport and instantly began talking the way we do. While doing so I wandered around taking photos haplessly, not realising what I’d done. I’d lost my wallet. 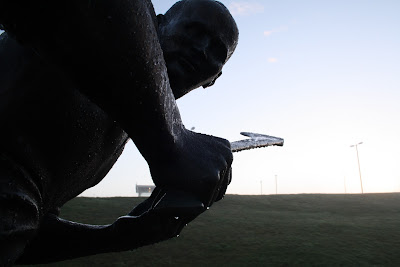 Appreciating a dew-covered statue of a hurler during those last moments of innocent joy …
Obviously I went all around the airport talking to people but to no avail. And I got really pissed off because of the dismissive way the staff on the whole treated me. It just wouldn’t happen in Australia. They wouldn’t just say ‘Sorry, nothing’s been reported’ – they’d suggest what you should do next, who you should talk to, where you could leave your phone number. So frustrating! Service is so bad on this side of the world!
Anyway, that was a really crap way to start my trip in Cork. But I got over it eventually. It was the credit cards I was most worried about, and they’re all sorted now. I lost about a hundred Euro, but that was the worst of it. In those last minutes before I realised I’d lost my wallet I took the picture below of a crow sitting on a sign, but as I took it, it flew off, which augured my bad luck ‘flying off’ because after that I was all good. 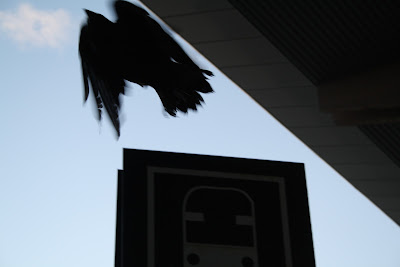 Losing my wallet though, did force a temporary stop to my travelling giving campaign. Right before I left I watched an interview with Australian philosopher Peter Singer, where he talked about his aim to change the culture of giving so that donation was an ordinary thing – something which you would expect any decent person to do. You could meet people, conceivably, and casually say, ‘Oh, so who do you donate to?’ I really like this idea, but if I’m going to donate to one organisation I want to do my research and work out which cause suits me, which one I really want to give my money to, and I haven’t done that yet. I can’t really explain it, I suspect because it doesn’t make sense, but I feel a kind of guilt being in someone else’s country and being better off than them. Here I am, a visitor, a traveller in London and there’s a homeless man whose country this is, and I’m better off than him. I just made a promise to myself that, while travelling, I would give something to everyone who asked it of me – even if it’s just always the smallest coin in my pocket (although I think giving single pennies away is more insulting than anything else). I know it’s irrational, but I don’t think giving can really be a bad thing, so I’m happy to keep doing it. It’s either homeless people, charity workers, or buskers, so the money’s never going somewhere it shouldn’t.
Anyway, onto actual Cork. This was my second visit, and Charlz and I basically fell into our old habit of waking up late, wandering around the city, going somewhere for breakfast, then spending the day until dinner in a cafe somewhere drinking coffees and hot chocolates. I’ve really missed our seven-hour conversation marathons in Gloria Jean’s back home, so we had to take advantage of the time we had. It’s hard spending so much time in cafes, though, because they don’t really have the flat white over here, and back home it’s the standard staple caffeinated drink. Without my flat whites I don’t know what to order. Lattes are pretty close, but they come in big effeminate glasses and I feel like an idiot. And cappuccinos? Eh, I don’t really like froth. Luckily, I think the flat white is starting to take hold. I’ve seen it on a few menus with a ‘New!’ sticker next to it, such as at Eat in London. They had it in the Cork Costa, but it was obviously really new and they were trying to fan the flame of its success. They had a deal where you could try it and if you didn’t like it you could have your regular coffee free, but they wouldn’t let you have it in any greater quantity than a small because of the risk, haha. 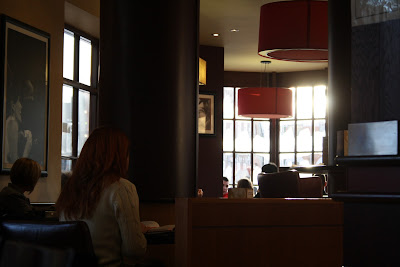 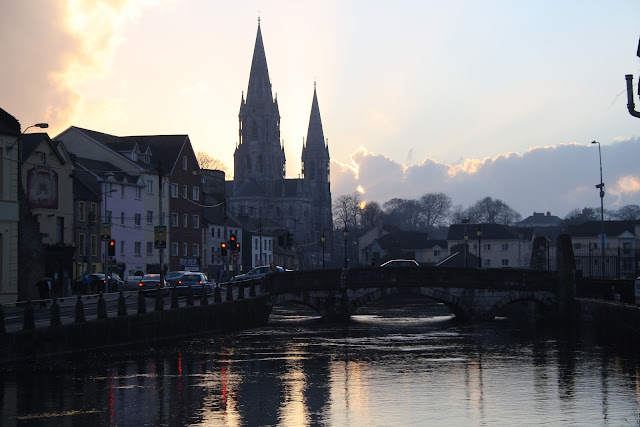 This time I made a point of taking a photo of Mr Connolly’s bookshop. Lonely Planet has named him as an integral part of Cork’s culture, and he’s a very interesting man. He resents being turned into a tourist attraction, and while I was talking to him (because Charlene knows him) he told someone off for trying to take a photo of him without his permission. I was therefore a bit apprehensive about taking this photo, in case he thought that’s what I was doing, but I got away without getting in trouble. 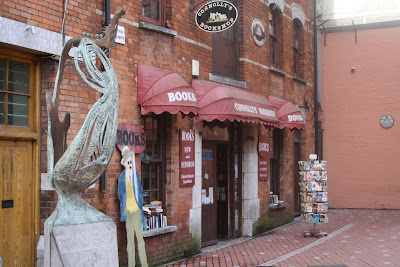 That’s James Joyce out the front, there.
On Charlene’s actual birthday we followed much the same routine as usual, going to cafes and stuff. 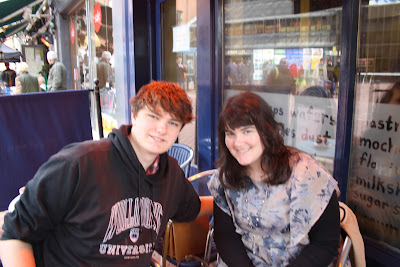 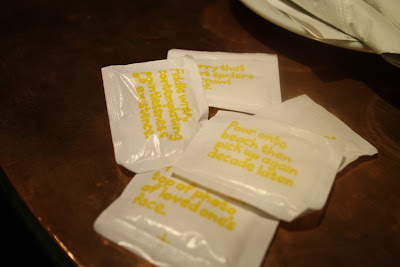 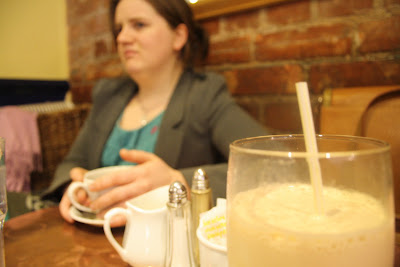 A disappointing iced coffee – the Europeans just don’t get it.

We also went out to dinner at Charlene’s favourite restaurant, Scoozi’s, where I gave a brief speech in an attempt to embarrass her. 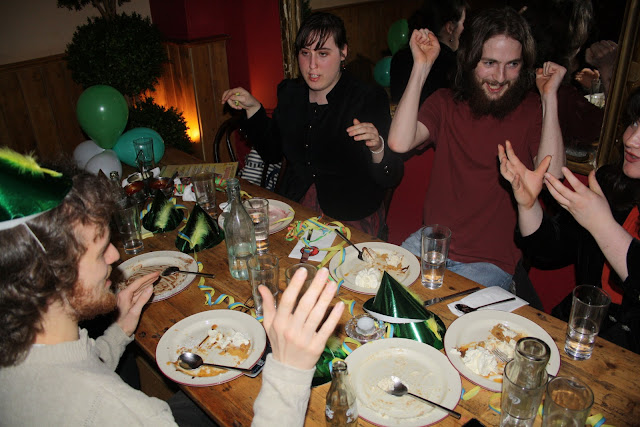 Anyway, I think this post’s gone on long enough!

Thought you might like an Irish look at cheap flights – but I think it’s a universal message! (It’s not finished until the bodhran player walks off stage)

Impressions of the emerald isle

The ubiquitous and omniscient Lonely Planet has seen fit, in a series of annual lists which has also featured Australia’s Newcastle, to name Cork, Ireland, one of the top ten cities to visit in the world. That’s a pretty big call, and I’m not sure how I feel about it, having just spent about nine days there. It’s probably a case of expectations being different to reality, mostly.
Australia is usually a pretty humble country, if not in its anthems and policies and slogans, then at least in the attitudes of its individual people. And I think we’re inculcated somehow with this idea that we’re the ass-end of the world, that Australia’s a good place to live, but that’s it’s culturally, architecturally, technologically, culinarily deficient and isolated and that, by contrast, all the countries in western Europe, including Ireland, are ‘better’ than us in those areas. The thing is that Ireland isn’t, really.
Before Ireland I was in England, and I mistakenly believed that Ireland was going to be very similar – a tiny but densely populated country. It’s not. Its population is only about four million, which puts things in perspective. Here I was expecting culture and technology and a golden promised land from Ireland, but even some Irish people I met said they thought they were kind of backwards. They don’t have hot running water like we do – they have to switch on a boost or something which provides a certain amount of it. They have about four public TV stations which are absolute crap, and they have to pay for even those with ‘TV licenses’ (and they still have ads, as well). In fact, you have to pay for everything in Ireland: TV, garbage collection, public toilets, and outrageously priced public transport. It suggests to me some extreme right wing politics, maybe? Because it’s like it’s been over-privatised; the anti-welfare state, so to speak. Or it could just be the recession. I tried to talk politics a couple of times, but not very fruitfully.
But by no means was it all doom and gloom. I had a fantastic time, really. All of the above just added to the beautiful and at times hilarious experience. On the plane in I thought the air hostess was speaking Gaelic and was about to translate into English, but it turned out it was just the accent. The weather was also a great novelty for me – so much snow!

At one point I imagined to convince an entire room of Irish people that my uncle was a ‘poker’, meaning his job was to walk across the Sydney Harbour Bridge every morning at 4am using a forty foot pole to ‘poke’ the Koalas off it into giant nets. I laughed halfway through the story and thought  the jig was up, only to find that they were still captivated by my tale, so I elaborated that I’d done work experience with him in year ten.
I was staying with my friend Charlene, and when I met some of her friends, one of them actually told me I was ‘so tanned!’, something I would never qualify for by Australian standards. They also told me they had a tradition of taking ‘beating’ (pronounced ‘baiting’) photos of one another, a tradition in which I shone:

I think the message for the trip was this, though:

Education riots in the UK; austerity in Ireland

Hi all you sojourners in the UK and Ireland

We have been hearing a lot here about student protests associated with the massive increase in the cost of university fees in the UK – though I think we are getting it on the news so much because of the incident in London involving Charles and Camilla. How are students on your campuses reacting? Do you find students in the UK are generally more politically engaged than at home, or is the student political context there similar to here?

And for those of you in Ireland – how are students and others reacting to, and affected by, the government’s new austerity measures?