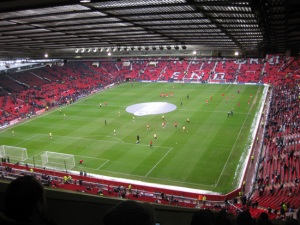 I spent Christmas with relatives from my dad’s side of the family in England. On Boxing Day I was lucky enough to have my dad’s cousin Dave take me to see the greatest football team in the world, Manchester United, play (and win) at their home ground, Old Trafford.

It was an absolutely incredible experience! Even if you’re not a football fan, or a sports fan in general, I think you couldn’t help but enjoy yourself. There’s so much atmosphere and so much energy, it’s contagious. I had a brilliant time, even though by the end of the match I was frozen to the seat.

One of the things that most struck me though is the intensity of the rivalry between Manchester City and Manchester United. Having a father who was born and bred in Manchester and has been a United support since he was 5 years old, I’ve always understood that they were rivals, but seeing it unfold in front of you is completely different. The hatred between the two teams is so intense that even when they’re not playing each other, United fans are still singing songs like “knick knack paddy-whack give a dog a bone, why don’t City f**k off home!” I saw United play Sunderland on the day that I went, but that little rhyme was sung loudly and proudly many, many times.

It’s something I really think we don’t have in Australia. We love sport, but this is on a whole new level. My 85-year-old great aunt has a framed picture of Eric Cantona hanging in her hallway next to pictures of her great-grandchildren, that’s how much this matters to people. I don’t know anyone back in Oz who not only loves their team that much, but who hates their local rival that much as well!

This entry was posted on January 6, 2011 by lucychapman. It was filed under Cultural differences, Festive season, The UK .