This is me in London.  No shit!

Technically this is Vatican City, but I didn’t have a guide book for there.  Visited Genoa, Rome, Arezzo, Florence, Pisa.  Ate real pizza (do not get napoli pizza).  Gelato is god’s milk.

Beautiful is an understatement.

Communist-era meal in a Polish ‘milk bar’ in Warsaw.  That purple stuff is beetroot soup, can’t recommend it. 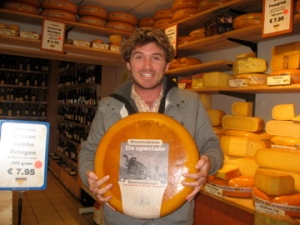 Dutch cheese shop owner: “we have a high standard of hygiene and cleanliness here.”

Our first bike trip to another town!  Nijmegen is about 20km away and it took us a few good hours.  On the ride home we decided to get a six pack each.  It took longer, but seemed quicker.  The Dutch have hard buttock muscles.  Our second (and only other so far) bike trip was to Utrecht, some 60km away.  Took us six hours (minus beer).  Decided to get the train home. 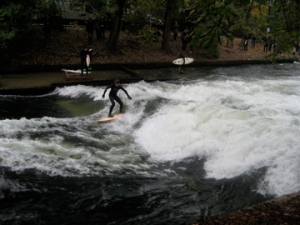 In our study week we visited Germany.  This is in Munich, where crazy guys surf in a canal on water straight from the Austrian alps.  The wave never ends.  Did not give it a try.

The ‘beer challenge’ in Munich.  Yes, drinking beer is part of the culture Mum.  Beer is considered food here, and is legally drank on streets, trains, banks.  Think this is my fourth liter.  Pretty sure the twizzle sticks weren’t put in by the bar staff. 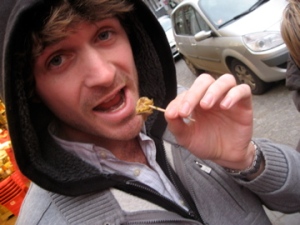 Eating my first escargot in Brussels, Belgium.  Loved Brussels and Bruges.  Can see myself coming back!  Also visited Antwerp and Ghent.

Helping old man Heineken out in Amsterdam.  Did not know a beer museum could be so fascinating!  Maybe it was the space cakes…

To be continued.  Anyone interested in more photos or stories from any of the travels (this is but a taste) just let me know and I’ll be more than happy to add them.

In Arnhem, the Netherlands, all the exchange students live together in a five storey building called Honigkamp.  Feel sorry for the neighbours!  Every Sunday night we organise amongst ourselves to host a national dinner – so far we’ve enjoyed Mexican, Spanish, Turkish, Hungarian, Canadian and of course Australian.  There are only two Aussies here, myself and Kristie from Brisbane, and we represented very well.  Vegemite sandwiches (Aussie chocolate!), self-made lamingtons (did you know one key ingredient is only found in Australia?), fairy bread and Kristie passed out before midnight.

Segment from my short-lived blog ‘WilliamintheNetherlands’ (http://williaminthenetherlands.wordpress.com/wp-admin/).  August 11.  Traveling in Krakow, Poland, a month before my exchange in the Netherlands starts.  Not really a cultural story, but a traveling story nonetheless.  Some swearing.

As expected, my drunk room mates entered at about 4am. Loud whispering, back slaps and yahooing – the usual sh*t. There were 2 groups, one French and one English, who it seemed had been drinking together. My other sober room mate was a girl. The sh*t lasted for about half an hour. I woke up early – 6:45 – with plans to visit Auschwitz. If you get there before 10am it’s free entry (ie you don’t need a tour guide to get in) and the bus leaves at 7:50.

HOWEVER: I noticed my shorts were in a different position to where I’d left them last night – closer to my neighbours bunk. I grabbed them and checked my wallet and camera. Camera was there, but my wallet was missing 50 euro. I waited a minute then went apesh*t. OK, so leaving my wallet in my shorts was lax of me, but it was right next to me on top of a cupboard. I shook the guy on the middle bunk awake. They were English. I tell him I’m missing 50 euro. Back and forth a few standoffish comments (f*k you where the f*k is my f*king money). He showed me his wallet, and it didn’t have much in there. By then most people are awake but I had the upper hand – no hang over. I asked the guy on the bottom bunk (f*k you where the f*king is my f*king money). He was a lot quieter, but again, no money in his wallet. By now I’m realising there will be no end to this – how do I identify 50 euro as mine? The guy on the top bunk starts mumbling ‘where’s my wallet?’. I stood up on the ladder and told him to look under his pillow (f*k you, look under your f*king pillow like all your f*king dipsh*t friends did). He pulls out a camera case but no wallet. F*k. I return fire with the middle bunk man, who insists they aren’t thieving tossers. Top bunk guy pulls out a $20 note from his camera bag. A $20 AUSTRALIAN note! “You f*king…” I grab the bag off him and find my 50 euro, along with some coins and a locker key. I gave him the once over, gave his mate in the middle a once over, packed my stuff and went to the bathroom. Now that I’d recovered I still needed to make it to Auschwitz. After my quick shower – heart still beating a 100 times an hour – the thief is waiting in the lobby. I’m glad that I’m taller than him. He says he’s sorry, but he can’t find his wallet or his locker key, he thinks his key was in his camera bag. After much unhelpful comments from me (f*k you I took your key – you’re the f*king thief!). I let him look at my wallet where the dumbarse thought I had his key. Of course, it was in my pocket. I left smiling that he was going to lose his 20zl deposit. 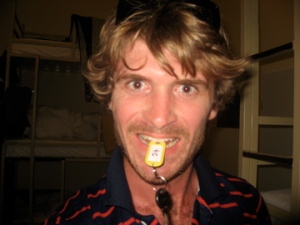