Drive Across the USA!

From Boston MA to Golden CO, three days of straight driving to my future home where I have never been before with my girlfriend Kat.
We came across some pretty American things, when driving west they have these water towers which are in the shape of an upside down water droplet with the town name on them written in massive letters. Now these things hold probably enough water so that everyone in the town could flush there toilet once and it would be empty, so its not much of a reserve but every single town had one! They came in many different colors and fonts, but they were all the same shape and size. 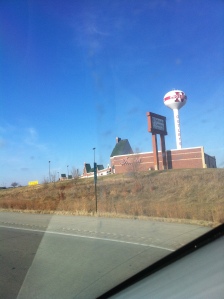 We all know that Americans love their big pick ups! The parking spots are bigger here than at home but still some of the trucks don’t fit into them. This guy here is pulled right up to the front of the park but he still has a good chunk of his ride hanging out.

I spent Thanksgiving with Kat’s family which was a lovely time, we really don’t do that enough in Australia. Getting the family together really should happen more than just around Christmas. The day after Thanksgiving they have an event called Black Friday which is like the biggest most epic shopping day of the year. I spent like $400 that day which may not seem much to some people but to me that’s massive. Every shop has massive sales like 40% off the leading brands.

There lack of tax on there alcohol is AWESOME! look at this   first my favorite beer from back home is $10 a six pack. THATS HALF PRICE! So they import it  and sell it for half price and still make money.

This is something my Father would love about this country, he would probably find some other beer he would lie here though.  Can I also point out this 9 liter bottle of bubbly. I should of put up a normal size bottle there to give you prospective but you can get the general idea. It turns out they don’t have RSA here so i guess this is what it leads too. 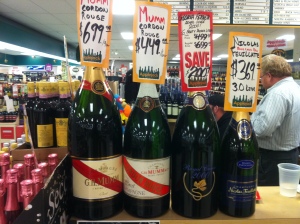 A good thing to get once you get here is a state I.D they really don’t like my Australian licence and I don’t want to carry my passport around with me. So as soon as i get a permanent home I will get one.

This will conclude my first post, I’m going to enjoy a white Christmas soon and some more crazy american driving.