I have been home for almost two months, and I wouldn’t say I am struggling to cope with the change, but it’s certainly a lot different to what I expected. I thought the experience of returning to Australia would leave me in despair, because of the final few incredibly intense days I spent in Los Angeles. The fourth of July was my last night in the city and rather than heading out, drinking and partying, I spent it watching fireworks outside my window with my best friend. It was the most magical moment of my life, it could have come straight from a scene in a Hollywood movie, but it happened to me and I am very grateful. While watching the fireworks show, I thought about home and how nothing could ever be this good again.

In reality, and in the present day I am very happy. I don’t think there was anything anti-climactic about going home at all. In fact, I knew that coming home was a huge part of exchange. It wasn’t a negative experience, as I thought it would be. I really wanted to see my family, I missed them a lot. There are only so many places in the world you can visit, without feeling the hollowness that comes with not having your family beside you.

I haven’t seen all my friends from home yet, but I regularly meet up with a few of my closest friends. I feel like I need that interaction, otherwise I will probably go crazy. It is difficult to stay motivated for uni, and since I am only there once a week, I’ve been looking for a job. I’m in the transition stage between university and the real world. I feel like this is one of those things that’s not as bad as it seems to be.

Anyway, I hope everyone who has recently come back from overseas is settling in and sorting out their new lives 🙂

I just wanted to share this promotional display I found at a popular US fast food diner. I’m not brave enough to try it 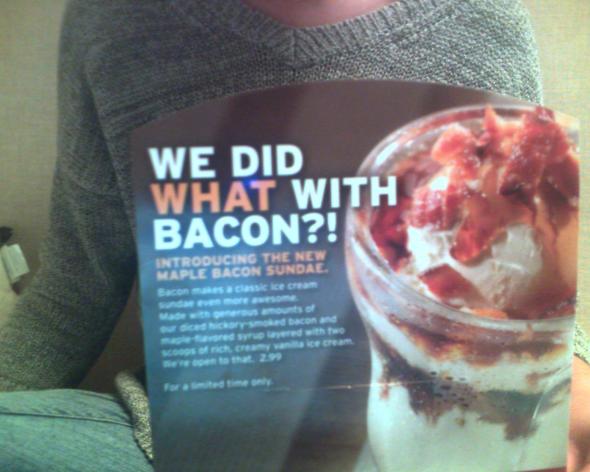 Grocery shopping in a foreign country even if that country is America, is a unique and confusing experience. Apart from the obvious problems with locating familiar brands at a grocery store, there’s also that feeling you get when you realise you aren’t going to find what you’re looking for, because it doesn’t exist.

Doritos Australia market a total of four Doritos products to their consumers; Cheese Supreme, Nacho Cheese, Original and Mexicana. The U.S market for Doritos has a remarkable 19 different flavours (remarkable to me perhaps) among them; Jalapeno, Fiery Buffalo, Spicy Nacho, Pizza Supreme and even Cheeseburger.

To my disappointment, this list of 19 doesn’t include one of Australia’s most commercially successful (and incidentally my favourite) Doritos flavour; Nacho Cheese. The yellow packaged Doritos (Nacho Cheese is actually packaged red in the United States and tastes completely different, just to be confusing). The experience of not being able to find Nacho Cheese is not the most impressive cultural slap across the face, but it’s still pretty mind-blowing. People tend to think of Australian consumers in much the same way as American consumers, and to be fair we are reasonably comparable; we eat fast food, we watch Hollywood films and listen to American produced music. But geographical and cultural influence still drives the market for some things, and I find that many of the goods available here in the States, would probably not enjoy a successful launch in Australia. Due to the Mexican influence here in California, the market for spicy foods is very wide. The standard flavour is almost always some variety of seasoned chilli, and as a white person with very limited tolerance to spicy food, I’ve suffered at the hands of Mexican cuisine. But of course, Americans love it. Spicy food in every form; sweet, savoury, cold-serve, warm-serve is available in excessive abundance.

Fortunately for me, Australia’s limited knowledge of Mexico and the wide variety of spices found there, means that we will remain with a single spicy version of Doritos, (which I didn’t know existed until I sought help from Google), and that’s okay by me since I can’t obtain any benefit from heterogeneity in spicy corn chips anyway. 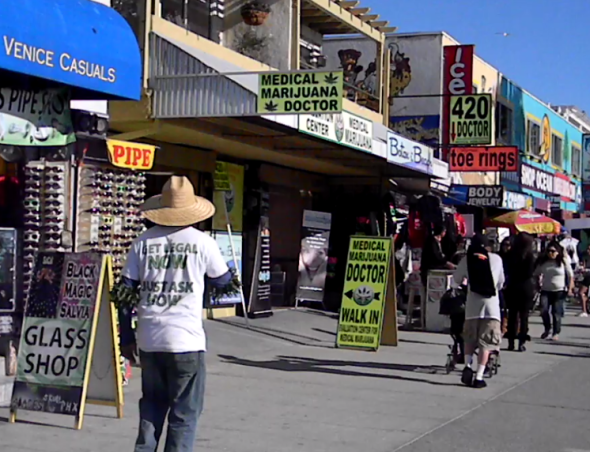 This might not look like your typical medical centre or hospital, but if you need a prescription for marijuana, you’d be most successful in getting one on the streets of Venice Beach.

I’ve found that to most Americans, Australia is seen as a great holiday destination with strange animals and friendly people. This is a very good reputation to have but unfortunately, it is these topics which make up the bulk of the conversations I happen to have with Americans.

The kangaroo usually comes up first in conversation which I don’t really mind. In fact I enjoy talking about what is unique about Australia; although I am starting to suspect that Americans are not really interested in my version of Australia. They are more interested in simplified caricatures and national symbols, that offer them a more comfortable albeit conventionalised version of Australia. I suppose this is something that I’ve found difficult to understand, because I am aware that I don’t exactly represent the quintessential Australian, but I offer some diversity that could potentially educate Americans about Australia, and relieve some of the simplistic views they might have of us. I think that a country is more than just the image it projects, but sometimes the image is all people care to consider. It is not bothering me so much right now, but it is starting to dawn on me. I do miss my family, but I love being here. I don’t miss my life back home as much, because I definitely think I am having way more fun where I am.

February 5, 2011 | Categories: Cultural differences, Fish out of water, The US | 5 Comments

And they have a tendency to put the name of other countries before a certain food to make it seem authentic and less American for e.g “Italian Sausage” and “Brazilian Mojito” (a drink my Brazilian friend told me he has not heard of lol)

Gun handling in the U.S.

How can I go to America and not shoot a gun? Of course I can’t, which is why we went to the shooting range today and I fired a gun for the first time. Yet another thing I can now cross off my imaginary list. I used two different types of guns, one .357 caliber shotgun and the other, a semi-automatic handgun used primarily for self defense.

The laws of gun handling and ownership are quite strict in California in comparison to other parts of America, particularly in the Eastern and Southern parts of the U.S. I’m not too clear on the specific laws and regulations, but in general you have the right to own a gun if you intend to use it for self defense. There are also strict rules about locking your weapon and leaving it unloaded when not in use.

However, the thing that surprised me the most about this whole experience was how easy it was to just walk into the shooting range, snag a couple of bullets and start shooting away like a maniac (at the target). There were no questions asked about my obvious (lack of) experience with gun handling. All I had to do was supply ID, sign my name, and briefly take note of the 7 or so house rules. After that, I was handed a gun and told to take aim and fire. Crazy stuff.

I can’t tell you how nervous I was initially, my mother would be so proud. My advice would be if you happen to be in the United States of America, I recommend you start shooting something.

I definitely see this experience as a significant example of cultural difference, because people’s reaction to guns here is quite relaxed. Many Australians are aware of the American way of thinking when it comes to guns in use for “self defense” and it’s almost comical to us at times. But I believe that U.S citizens take the right to bear arms very seriously. Didn’t stop me from having a laugh though.

Los Angeles: The place where everything happens

I am in the process of making the final preparations for my departure to California and this will be my first (and last) post from home.

I’ve heard a lot of crazy things about LA and the type of people who live there. Hopefully my future posts won’t end up sounding like Hollywood gossip columns, but either way it will definitely be something new and exciting. I’m sure it will open my eyes in a good way. Of course, studying at UCLA will add a lot more diversity to my experience. I am soooo looking forward to it.