“‘Oh frabjous day! Callooh! Callay!’ He chortled in his joy.”

Greetings, reader. Luke from UEA in the UK here, writing about mine and Tilly’s trip to Paris.

I mentioned parts of our journey from London to Paris in ‘Three wollongongers do London: the longest post ever part one’ so I won’t say much about it here, except that despite its being eight hours long, it was surprisingly pleasant. I slept the first two hours, in the middle was a scenic ferry trip from Dover, and the last two hours were spent watching the beautiful French countryside at sunset. 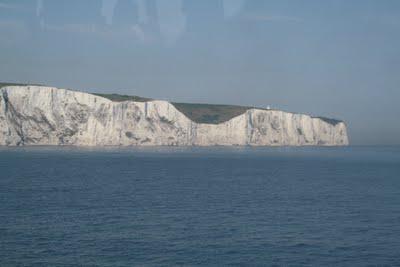 The White Cliffs of Dover. 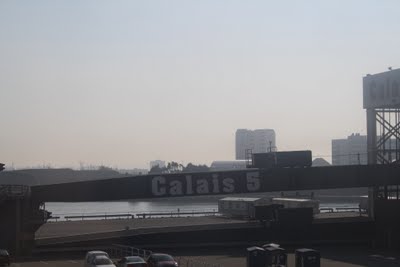 Compiegne, where Joan of Arc was captured by the Burgundians in 1430 (HSC Exthistory major project knowledge YAYUH!) 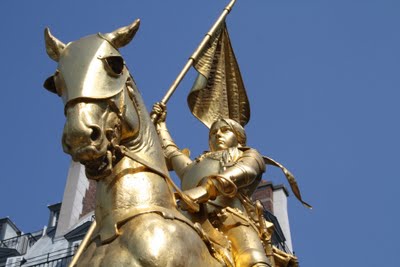 … And a statue of Joan we came across later in Paris. 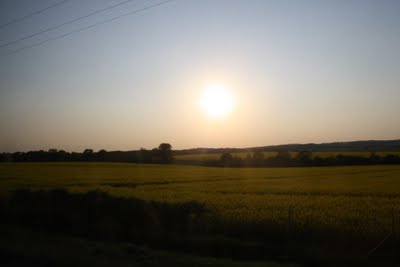 One of the highlights of the journey was Til pulling the face below and looking exactly like her brother Riley:

We stayed in Paris for a week, on one of the St Christopher’s Hostels one-week deal things. The hostel was pretty awesome. It was purpose-built, so the rooms weren’t cramped or anything, everyone had massive storage lockers, and each bed had a curtain around it. The staff were really friendly, too. We had these two English roomates who’d cycled from Dover to Paris. We were talking and when I mentioned I was doing this blog they wanted to know if they’d get a mention in it and I was like, ‘You might need to make more of an impression.’ And then they kept trying to think of ways to get in, including making Til sit through this weird video they’d taken on their phone the night before. Hey guys, if you’re out there!

Obviously one of the best things about Paris was the food culture. We pretty much had baguettes at every meal, and camembert, and cherry tomatoes, and this AMAZING JUICE that I drank litres of at a time, and wine, and also Pringles, which I’d taken to calling ‘Pwong-glaze’ in an exaggerated French accent. They sure take their bread and dairy seriously over there, which results in incredible food. One supermarket we went to had TWO AISLES of yoghurt. We thought this one was funny, though: 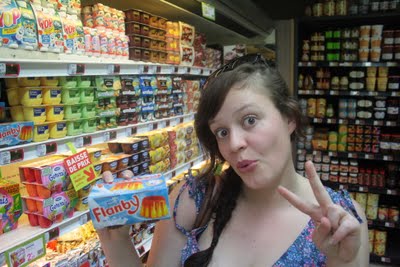 Til getting Japanese with some Flanby because it sounds like a Pokémon.

Every night there were groups of picnickers lined up all the way along the Seine, and this community of Jews would congregate around this one street corner. It was so cool: 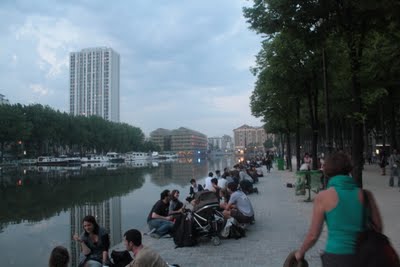 Our accommodation on the left (not the huge one). 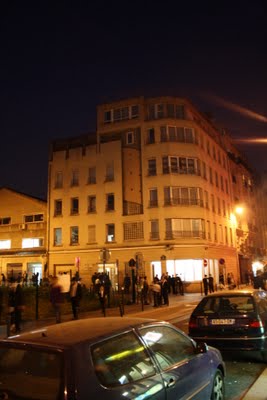 After the events I think Tilly might be planning to write about in a blog post of her own involving a lost passport, we went for a relieved walk along the canal and got  some snaps. The next day was Easter, and I was desperate for some Cadbury, but it seemed they don’t have it over there. We decided to spend the day doing another one of those free New Europe tours, which was great, but perhaps not as good as the London one. Where it started up there was this group of exhibitionist Brazilian dancers, and this little white-as French kid was trying to join in: 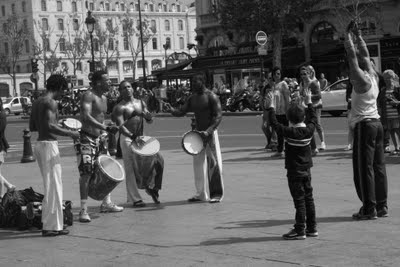 The tour took us all over Paris, to heaps of great spots. Our guide Jenny told us about the bizzare Metro entrance signs. Apparently they were done in the Art-Nouveau style at the turn of the twentieth century, and they used to have big glass cases as well which scared the people of the time, new to underground trains, because they looked like giant monsters (which I think is understandable):

We also saw on the tour a bridge that Jenny calls the world’s first Facebook photo album because it’s covered in sculptures of the drunken attendants of a royal party. Apparently the king had his sketch artist walking around taking comical likenesses at the bridge’s opening party to be sent to the guests, but he then decided to have them turned into sculptures and displayed on the bridge for all to see instead, hence, Facebook. 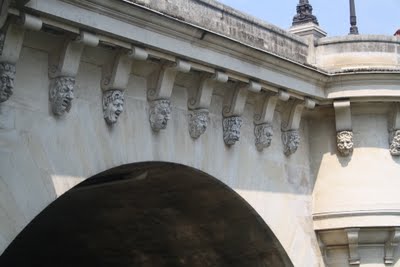 The other cool bridge was the Ponts des Arts, or the Arts Bridge, which crosses the Seine between the Louvre and the Académie française, and which is one of those places where lovers attach locks and throw away keys. I awkwardly asked Jenny if she had one on there and she said she did, but it was gone now and so was the boy … Overstepped the bounds of tourist-tourguide familiarity, I think.

Jenny telling us about the Académie française in the background. I’m abivalent about the concept. I like that they value their language enough to defend it so militantly, but I also don’t think language should be regulated in such a way. Pretty funny though, that when something new is invented they have to decide whether it’s feminine or masculine in French. Apparently it took ages for them to decide about the iPod.

A guy painting on the Arts Bridge. He’s ACTUALLY WEARING A BERET!

I love the way the French value art. At one point we stumbled upon an orchestral group just performing in public, just for no reason. There were so many people just sitting playing instruments and singing in the streets or along the Seine in the evenings, without anything to put money in. They were just doing it for the love of it. Amazing: 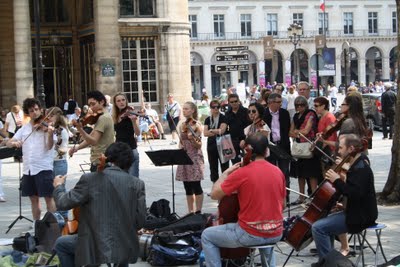 By the end of the tour we were once again weary, worn and dusty.

Dusty feet while listening to the last story of the tour – the Parisian resistance in World War II.

We wandered lackadaisically into Parisian suburbia in search of food and stumbled upon what was to become our favourite French bakery, the Boulangerie/Patisserie Julien. They sold pre-filled baguettes which … words fail … They were PHENOMENAL haha. BEST EVER. We went there like, three times over the week, sometimes crossing the entire city just to get there. 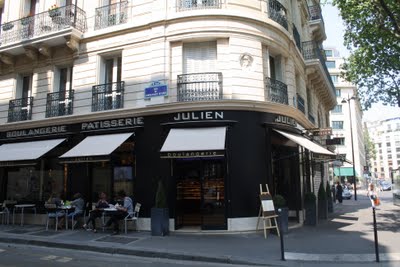 The next day we set out needing to purchase deodorant, thongs, and shorts for me, and supportive shoes and some other crap for Til. Typically I had all my stuff within the first hour or two, but it was more difficult for Til. I bought a pair of ten euro thongs from Marc Jacobs, where shorts cost 700 euro, then got to walk around with the bag all day pretending I was rich. What we really needed was a shopping centre, but not knowing where any where, we stupidly ended up on Champs-Elysees and, as we know,

‘The Champs-Elysees is a busy street’

and not the best if you want supportive girl’s shoes and not high heels, haha. It was a bit of an ordeal, so we eventually had to go and have a Julien-aided laze in a nearby park, which resulted in my first of three park siestas during our trip. 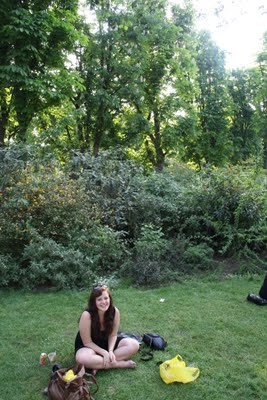 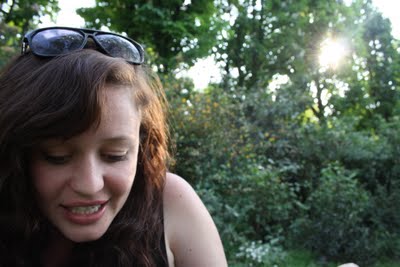 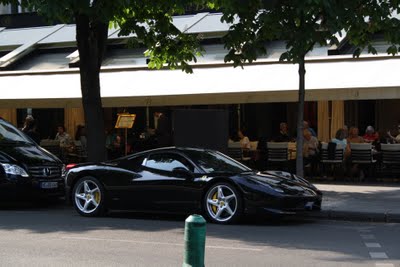 You know you’re near Champs-Elysees when …

We had another picnic that night on the canal. 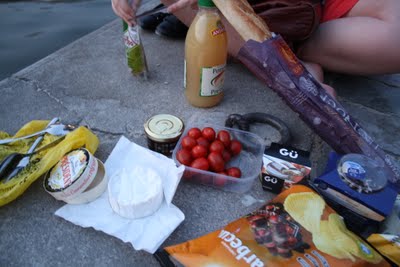 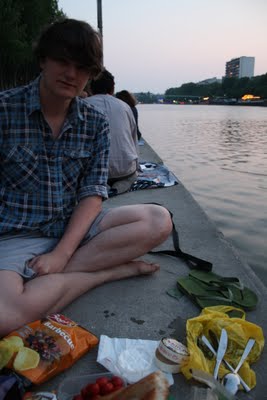 On Tuesday we visited the Musée d’Orsay, the foremost French Impressionist art museum. It was really great. The line to get in was astonishingly intestinal. We actually couldn’t find the end because it had coiled out beyond the rope barriers. We found what we thought was the end but was actually just a bend and I left Tilly there while I went to see if I could find the end anywhere else. 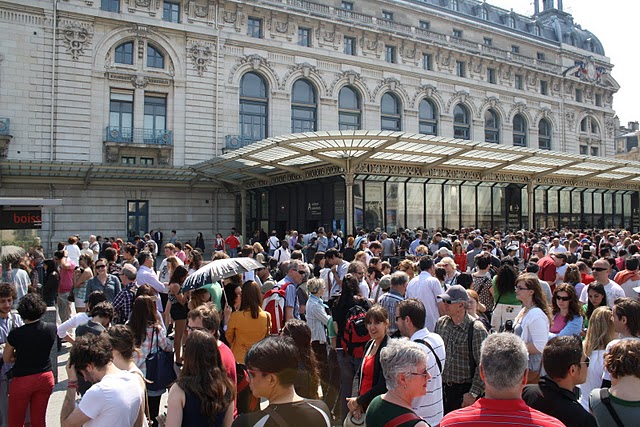 By the time I came back she’d been osmosed into the queue and we’d accidentally cheated the system, but we weren’t complaining.

Wednesday was a biggun. We went to look at the Eiffel tower in the morning, then went on a tour of Monmartre in the afternoon. 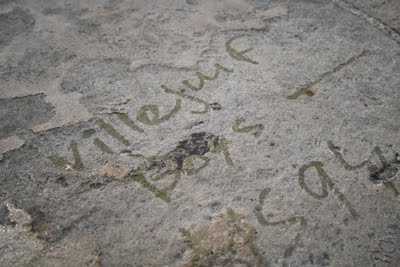 Graffiti near the tower. For some reason it’s hilarious to me that French gangs do this too. Oh yeah, Villejuif boys. You’re real hardcore. 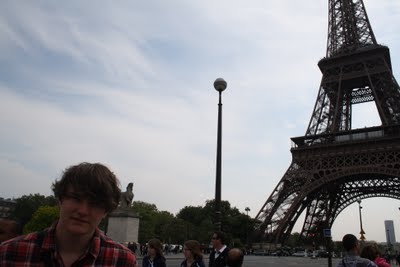 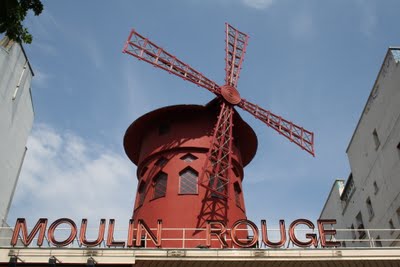 Start of the Monmartre tour. 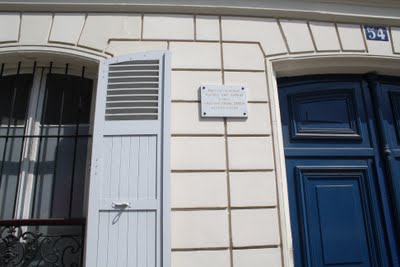 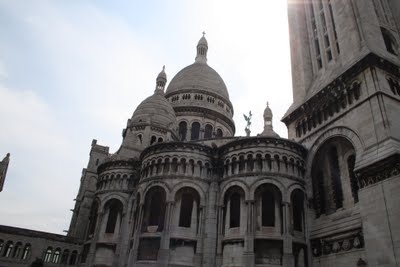 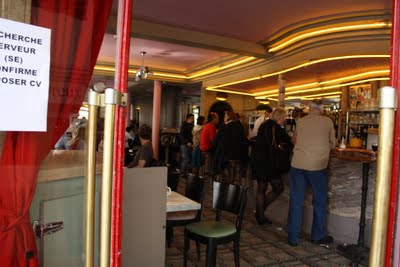 The cafe from Amelie.

We went to the Louvre that night, which was obviously fantastic. Although, to be honest, we were a bit museumed and galleried out. We’s seen the National Gallery, the British Museum, the National Portrait Gallery, and the Musée d’Orsay all in the space of a week. Although I know there’s not really any alternative, I really believe that the amassing and displaying of art in huge collections is not the best way for it to be experienced. It’s the same principle as a single person’s death being more affecting than thousands – too much and it’s an overload, we can’t appreciate it. I think the only way you could fully appreciate these great galleries would be to live locally and explore them bit by bit over a series of visits.

The Victory of Samothrace, one of my favourites.

Til enjoying her favourite, with a title as long as the painting is big, Jacques Luis-David’s Consecration of the Emperor Napoleon I and Coronation of the Empress Josephine in the Cathedral of Notre-Dame de Paris on 2 December 1804. 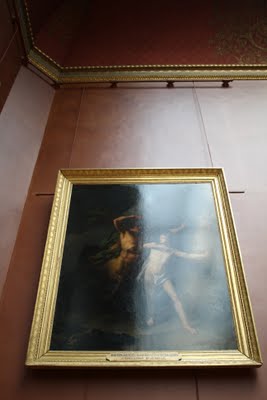 Aphrodite of Milos, or the Venus de Milo 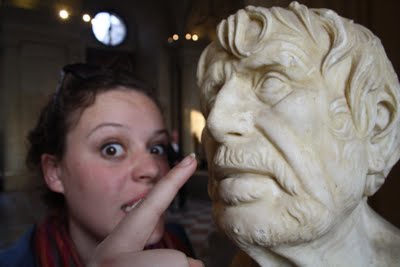 ‘This is for Works and Days, Hesiod!’

Nip in the bud.

Tearin up the D-floor with the Louvre statuary.

For our last day in Paris, we planned to take a picnic to the Palace of Versailles.  Unfortunately it was a disaster. It’d been remarkably clement up till this point, blazing everyday, and we’d been wasting it inside at the museums. We really should’ve saved one of the museums for a rainy day and taken advantage of the sun while it was there. We didn’t really know how to get to Versailles, and we kind of got lost. We were on a train we thought was taking us there, but then there was an announcement in French and it stopped and everyone got off and I was wearing shorts and thongs and FREEZING so we just decided to turn back.

We ended up eating our picnic on the train back. Because we’d been picnicking almost every meal, we were forever in need of cutlery. There was this one supermarket up the road which had a torn open packet of plastic knives in it, so I kept stealing them out of there. We ended up calling them Subtle Knives because of the subtle manner in which I’d taken them.

Unfortunately, the Subtle Knife shattered on the journey back from halfway-to-Versailles whilst dealing  with some particularly stubborn butter: 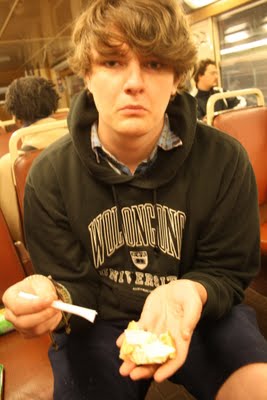 The scene of the accident.

The extent of the damage.

But the Subtle Knife will live on forever in our heavy hearts and our buttery, buttery hands, and also in the epilogue to the His Dark Materials trilogy that Phillip Pullman is sure to write, Shards of a Broken Knife:

(an amalgam of images from http://www.webstaurantstore.com and http://www.amazon.com)

And so our trip to Paris ended in failure and tragedy, but that couldn’t tarnish the amazing, though somewhat travel hungover from our previous escapades in London, time we’d had. Vive la France!

This entry was posted on May 31, 2011 by lukebagnall. It was filed under Cultural differences and was tagged with France, Paris.