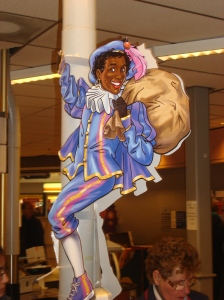 I have been in the Netherlands for over three months now, and I haven’t really been shocked by anything. Sure, their commitment to riding their bicycles in the rain, snow and hail is mystifying. But until the lead up to December, I was pretty cool, calm and collected. But then I began to notice some odd decorations in the windows of shops. Namely, colourfully dressed black dolls similar to ‘Golliwoggs’. I was quite shocked, because the Netherlands has a reputation for being a free-thinking liberal minded country, and these dolls would be completely unacceptable in Australia.

Apparently, the decorations were for the Dutch Christmas, called Sinterklaas. Sinterklaas is celebrated on December 5th, and involves a Santa type figure arriving on a ship from Spain to give presents to children. However, he is not aided by elves, but by black slaves called the Zwarte Piet.

So every shop in Utrecht has pictures and dolls of Zwarte Piet. However, the Dutch claim that the tradition is not racist. They argue that Zwarte Piet isn’t an African slave, but is only black because of soot from coming down the chimney. But then how are their clothes perfectly clean?

I couldn’t believe it, so I went shopping and took photos of every example of what I perceived to be blatant racism. But I was absolutely floored when I saw people actually dress up as Zwarte Piet and paint their face black. Seriously. I do not think that you could get away with that in Australia. 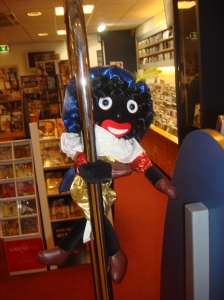 This entry was posted on December 8, 2010 by whamsterdam. It was filed under Festive season, Netherlands .