Fresher’s week at University in the UK: New Experiences

Hi all. My name is Maureen and I am on exchange at the University of Lancaster. I’m still settling in but one of the things I wanted to blog about was things that have been new to me so far. It’s been a bit of a honeymoon period for me as of now because of all the fresher’s events on in the week… quiz games, bar crawls in Lancaster, Indie clubbing in Manchester and dress ups. All this stuff is obviously new because we don’t have freshmen in Australia.

However, the extra weird/new thing for me is that all the fresher events are organised by the college you live in. It’s like Hogwart’s or something here. There’s about eight different colleges and the rivalry between each is really really intense. It’s like your whole university identity is defined by your college rather than your faculty (as it would be in Australia). 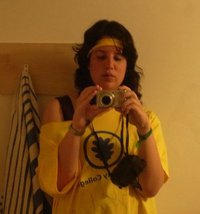 Me dressed in my College shirt for a bar crawl. Our flat decided to go for an 80’s look.

if a person is unfortunate enough not to live on campus (most people do), they get defined by the region they come from. Speaking of regions, there’s alot of rivalry between regions too. My room mates tell me the North of England is practically a whole other country to the South. There’s one guy from Birmingham in my flat and he gets insulted all the time because he’s from the ‘posh’ part of the UK.

Finally, last new thing: sharing a bathroom, shower and kitchen with thirteen other people… this? New and not so fun.

This entry was posted on October 8, 2010 by InkAshlings. It was filed under The UK .