I recently returned from three months living and studying abroad in the current economic shambles that is the country of Greece.

Having travelled extensivly and lived abroad before I presumed this return would be like no other, sure I would be sad for a day or two but would get back into the flow of things quickly like an professional traveller.

For some reason this return has been the hardest and I was not sure why.

This was only three months away, last time I was abroad living in Ireland for seven.

I knew I had limited time in Greece due to visa restrictions, so it wasn’t a surprise I was asked nicely to leave once those three months were up.

I was looking forward to seeing my family and friends and the beautiful country which I realised I loved more than I let on.

Yet something had gone wrong this time and I fell into a pit of sadness and had a mini depressive episode the first few weeks back.

I realised that whilst my family were pleased to see me, many friends had moved on or where busy or lived in differing corners of the globe now.

Being the constant traveller makes you extremely popular on social networking sites such as Facebook where everyone claims to live vicariously through your travels, but it makes for a pretty lousy physical relationship, with many wary of putting in a lot of effort when im potentially going to run away again to some other distant land anytime soon.

Those that I have seen have helped make the transition smoother, especially my best friend. It doesn’t matter how long we go without seeing each other nothing changes and we still have the best time.

I had applied to two internships before I came home so that the re entering of Perth would be easier, both of which I found out I did not succeed in getting.

I finally found a part time job which is lovely and has deffinatly helped in regards to finances, but something is missing still.

Two of my best friends currently still live in Greece, and it is often with a pang of jealousy that I Skype with them with their tanned skin, sunny weather and hilarious stories of the daily trials of Greek life.

Whilst in the current situation I dont have a pressing desire to be living in Greece again, I have come to the conclusion that right now Australia does not hold the answer. And that I need to continue my searches for jobs and experiences elsewhere.

I also had a terrible headache for the first week and a half which I realised was my body going through caffeine with drawls from the amount of coffee and frappes I was consuming daily in Greece.

It was also hard to get up before 12pm in the day, and eating dinner at 6pm was also eerily strange, as that was normally coffee time not dinner time!

In saying all of this things are better now, I have been home a month and have really enjoyed spending quality time with my family and catching up with friends. I am still struggling to find any work or work experience or internships in journalism/public relations but am becoming more upbeat and positive again.

I think the change of weather (well in three months when spring arrives and winter ends) shall be good and I’m starting new activities and volunteering in an effort to re inspire myself and feel as though I have a purpose being back here in Perth (study doesn’t count, its like having a job you dont get paid for 🙂 )

To all of the other returning study abroaders I hope your transition home is much much smoother than mine was this time and that the reverse culture shock of returning home does not last too long.

The re entering culture shock as bad as it has been this time around, I certainly would not change the experiences and friendships that I made in Greece and would readily go through it again in a heart beat.

You Know Your From Thessaloniki When…

There is also a group that I found on facebook which gives some interesting/humorous insights into living in Greece’s second largest city!

Here are a few of my favourites:

You go to a restaraunt and expect the fruits and dessert to be free of charge, and sometimes the wine as well.

Dinner reservations are always made after 10.00pm.

You start off for university in the morning but end up at a cafe having a frappe with friends instead!

The people you talk to look you straight in the eye and tend to stand about 5 cms away from you.

It doesn’t matter what you have on you always find time for a frappe.

The metro is a legend to you.

You think Athens is a country north of Libya.

Also im not sure how to post videos but check out this video of the local football team Paok. This is the reason they are routinely banned from the stadiums.

I recently spent five glorious days in Mykonos, the ‘party island’ of Greece.

It was in a way a trip to say farewell to Greece, as due to visa issues I am going home end of this week.

I went with my two best friends Julie and Bella and simply spent the time swimming and picnicing on the beach, drinking frappes, playing the Greek version of backgamon and eating fine food in tavernas.

Mykonos in Greek means “windy” and it is one of the windest islands in Greece.

It is also one of the most beautiful with crystal clear turqouise waters, rocky and dramatic coastlines and the typical white washed square houses accented with blue trim. 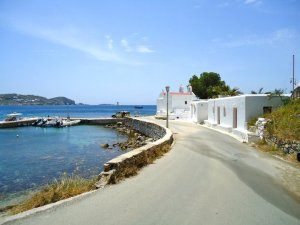 To anyone else who is facing the prospect of returning home to a cold Australian winter….well as cold as it gets. 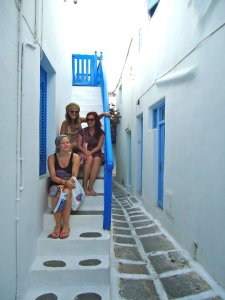 Myself and my two best friends 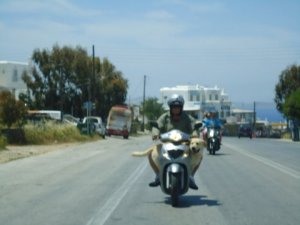 The only way to transport your dog in style!

In Greece Easter holidays fall over two weeks in the end of April, which allows ample time to go traveling. I chose to spend 10 of those days on the island of Crete, south of the Greek mainland. Crete is one of the largest islands of Greece and as I was travelling with two Greek friends who grew up in Crete I was really excited to experience another side of the Greek culture. I spent the time camping with a group of 5-18 friends (depending on who joined us each night) which proved to be a lot of fun as you can imagine. 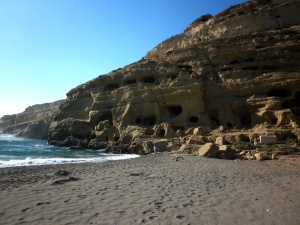 Crete is a beautiful island and we were really lucky that the country side was in full bloom at this time of year with camomile, daisy and other varieties of purple flowers forming a carpet across the landscape, interspersed off course by olive trees. I spent the time exploring ruins such as Knossos, relaxing on the beach and eating too much local food in tavernas.

The Cretan Easter celebrations differed slightly from the mainland, there was the traditional midnight mass on Saturday night followed by the lighting of a bonfire outside the church, except that fireworks were also part of the celebrations. Fireworks are legal in Greece so every second person was throwing and letting off fireworks left, right and centre, which gave the celebrations a slightly strange edge. No one I spoke to could answer as to why it was traditional in Crete to throw fireworks as part of the Easter celebration, but I am glad that fireworks are not legal in Australia after that night. Easter Sunday was spent eating a traditional lunch of roasted lamb along with salads, potatoes and breads with my friend and his family where far too much food was consumed. We slept every night on a different beach and even spent two nights sleeping in caves which was an amazing experience. I really enjoyed my Easter in Greece which was really different to the one I would have had back in Australia (not a single chocolate easter egg in sight) and celebrating it with friends and their families was really special as well.

I have been spending my semester abroad studying in the city of Thessaloniki in the north of Greece.

My first impressions upon arriving in Saloniki were of disappointment. The sky was grey and overcast, the weather barely 10 degrees and the buildings seemed dirty and un appealing. Nothing seemed to work as it should, or as it does back in Australia. Nothing can be achieved in one day, for instance if you want to post a letter home it will take a few days as you need to go and buy and envelope one day, and then try the post office a few times until its open to send the letter. It can be frustrating and exhausting as you try to push past this to make life work the way you think it should. This view was soon overturned as I made friends, the weather improved and I began to really appreciate the beauty of the city.

The streets are lined with citrus trees which means that there is constantly a faint citrus scent wafting down the streets. You see past the graffiti and the ugliness of the buildings and instead begin to appreciate the undercurrent of the Greek culture which pulses through the city. The art of taking a coffee with friends and family for hours every single day. The sharing of dishes at meal times, which also last for several hours, the Greek version of siesta which means most of the shops close in the afternoon every day. You begin to adapt to the lack of urgency which surrounds everything, and it no longer bothers you that it can take days to fulfill a simple daily task, as that’s part of the charm of Greece.

At first I was overwhelmed with the daily life of living in Saloniki, but now I know im going to find it really hard to adjust to being back home in Australia, where it is rude to be more than 10 minutes late to meet a friend, a coffee takes 30 minutes to drink at most. You also can’t leave everything to do tomorrow like here. Whilst today you don’t have anything specific to do, your too busy having a coffee and enjoying life to do it today so you will do it tomorrow instead.